I kept seeing the Starbucks red cup referenced, so this morning I did a google search to see what the hype and offense is all about, and being ‘in the know’, I decided a second blog was in order. So here it is, awkwardly sandwiched in my 30 days of acknowledging victims of sexual abuse. But then, a good cup of Salted Caramel Mocha is the perfect treat for someone going through hard times, so maybe it’s an okay diversion.

I’ll start with saying I don’t care one iota if a business advertises Christmas–or snowflakes–on their cups or not. Even if they have done it for a bajillion years, it doesn’t offend me if they stop. They put it on in the first place for advertising, not because Starbucks loves Jesus. It’s business. It’s advertising. The thing that sells is the thing they will use. We ought to have been just as offended that they used it in the first place, because Jesus and Christmas are worth more than that. But we were not offended then, and we shouldn’t be now.

And I don’t really care if people say Merry Christmas to me or not. But I do care if businesses tell people what they may and may not say, on a faith level. Freedom of speech is freedom of speech for all. At least it should be, though it seems not to be. That’s a bit different than the advertising thing, though they lump it all together. And I am exercising my freedom of speech here, even though many people won’t agree with me, and they have the right to express their opinions also. And when I go out this holiday season, I will exercise that freedom again and say Merry Christmas to everyone if I want to. And I won’t do it to offend; I will do it because I love Jesus and I love celebrating this ‘birthday’ we’ve given Him. (We don’t really know the exact day.) Odds are high they will say it back to me.

And I love all the joy, happiness, and ‘light’ of the season, so soon after the dark, black of Halloween. (Yes, I hand out candy to all the little people who show up, dressed up in their costumes. No, that’s not celebrating the dark side and it doesn’t mean I celebrate death and goblins and all that occult stuff. If you want to tackle me on that–as some already have, my email is trudy(dot)metzger(at)rogers(dot)com. Your venting won’t offend me, or make either of us more or less Christian.) And while I know the ‘spirit of the season’ will be short lived, I enjoy it for the short time when people celebrate hope, and play cheerful Christmas carols. No other time of year is Christ proclaimed unwittingly, in the way He is at Christmas. But that’s all temporary if He’s not alive within. 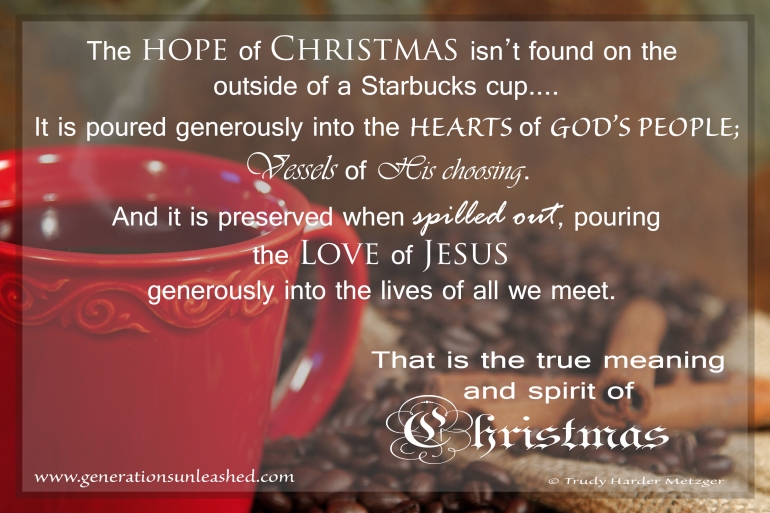 In the middle of the political correctness, and the spats over advertising, I care that Jesus is so alive in my heart that He flows out of me in love, not a ‘feel good’ into me in the form of some overpriced liquid in a ‘Christmas cup’. I care that I drink deep from His cup and represent Christ so well, that those who know me or meet me want to have mass (meaning full communion) with Christ, and thereby bring Christ-mass into their personal lives. The kind that lasts an eternity and doesn’t land crumpled in the rubbish bin when the drink is all.

As for Joshua Feuerstein, and the video he created… I found his initial ‘trick’–as he calls it–witty and somewhat humorous, and if he had left it there, it would have had more impact. But then it turned into a ‘let’s show them’, which in turn makes Christians look like idiots, IMHO, and the testimony this is as Christians in the news, is a bit embarrassing. Far as I’m concerned, less advertising about Christmas takes a lot of ‘fake light’ out of the world, and the true Christ who shines in our hearts, will shine all the brighter.

And there is something about the Love of Jesus Christ, when the soul is black and hopeless. His Light is Life to the searching. Hopefully, with less fake lights, some will see the True Light of Christmas and feel His Love. For ‘while we were still sinners’–wandering in black hopelessness and unworthy of Him–‘Christ died for our sins’. What a beautiful truth to come home to. What a powerful reason to celebrate Christmas in a boring red cup…

I’ll have the Salted Caramel Mocha, Venti please, in a boring red cup, minus the snowflakes. The thank you I offer, the smile on my face, the personally meaningful ‘Merry Christmas’, that’s the overflow of Christ in me.

God said in Deuteronomy, “I have set before you life and death, therefore choose life.” And the Bible repeatedly tells us to ‘bless and curse not’. I choose blessing.

On that note, #MerryChristmasStarbucks! I won’t be boycotting you or trying to negatively impact your business; you have my business this year, same as every other year.