The first dog to enter Kaiser’s oversized personal bubble was a giant, well filled out, tan and black German Shepherd. He had the straight back and full body and a general look of authority and confidence. Kaiser is lean and slanted with a bit of a wolfe-like face and mane area. Especially when his hair flares in aggression. And it did.

Kaiser lived with seven or eight other dogs at camp, I was told, and did well. He went to obedience training and spent time with other dogs. He did well there too, I was told.  So when he bristled at the sight of one old, unconcerned Shepherd, and looked like he was ready to slaughter him for lunch, I gulped. And I certainly didn’t know what to do besides pull back while he tugged forward, barking viciously .

The gentleman with the other Shepherd looked as unconcerned as his dog, and moved forward, even as I apologized for my dog’s behavior, which was drowned out by the raucous. At length the world was quiet, and before I could say a thing, the gentleman spoke.

“You have a pretty vicious dog there?”

I explained that I had owned him for all of under three hours, and still had quite a drive ahead, and I really didn’t know he was vicious. “When you look at him, does his face look vicious?” I asked him, because I couldn’t see my dog’s face with him pulling ahead of me like that, and besides, he owned a Shepherd. He was far more likely to know.

“Yes, he looks quite vicious, really,” he said.

“I’m beginning to wonder what I’ve gotten myself into,” I said. “No one mentioned any of this to me. I wasn’t expecting it.” I apologized again, this time without the racket, and said I would take him to another corner and figure it out.

But the gentleman encouraged me to stay. “Give them a chance. My old guy here can handle him. He’ll calm him down.” So, instead of moving further apart, we moved closer together. Nervously I watched as Kaiser barked and threatened, teeth bared, his bark carrying for miles around. And then he calmed again. We moved closer, letting both dogs move until they were face to face, and that is when I witnessed a most miraculous thing. Kaiser bristled a bit and barked loudly again. The older Shepherd returned a gentle authoritative bark, and kept walking. He walked right past Kaiser’s face, brushing gently against him–at which point the usual dog greeting ensued, which I shall not describe–and then the old fellow walked around to the other side and brushed right up against Kaiser again, ever so gently again. The barking stopped instantly, and Kaiser had a new friend. It gave me a shred of hope that I had not purchased  a dog that would maul anyone and anything that approached me.

The other Shepherd went and stood at his master’s side. Kaiser came and stood ever so slightly in front of me.

“Look at that! You have yourself a protector. He’s already bonded with you and will defend you,” the man said.

I wasn’t sure if that was comforting or terrifying, after what I had seen, and with picturing a family and neighbourhood of children back home, but at least there was a bond. It was a starting point. We chatted a while before we each walked our separate ways. That’s when other dogs came. Not one. Not two. But dogs. Plural, way too many, walking around. I wasn’t ready to drive with Kaiser, and I wasn’t ready to deal with his aggression. I opted for the latter and kept walking, trying to keep him focused away from the other dogs, but he was on high alert, and it started all over again. The gentleman and his Shepherd walked our way, the old shepherd walking between Kaiser and the other dogs, and again Kaiser settled down, only distracted momentarily, to bark, when a new dog came too near.

We returned to the car, after about an hour of play, and a drink–his drink, not mine, because I knew I had hours of driving with no break–and headed for home. He nuzzled close to my hand when I reached back each time he showed signs of distress, and calmed right back down.

About an hour from home I noted my gas tank was running low, and stopped at the last rest stop to get gas and rid Kaiser of more energy. I pulled up to the gas bar, opened the door and Kaiser again dove recklessly at me. And at that moment I stopped being his comforter and I became his master. I pushed him back into his seat with great determination, much like a kid trying to force a heavy spring loaded jack-in-the-box into its container, and closed the lid. I mean, the door. I waited a moment and tried again to open the door and get gas. Again he tried to bolt. So I belted myself in and drove  across the parking lot. And that’s when he figured out I don’t like his behavior. I talked to him like I would to any toddler in a tantrum, and knew he didn’t understand a word of it, but I felt better. And I was certain he understood my displeasure, because he whimpered and barked a quiet, sad little bark and then settled down when I told him, “No! You can’t behave that way and there is no way you’re getting out. You will learn to sit quietly and wait.” And he sat back in his seat in resignation.

We sat there for what must seem like ‘forever’ in dog minutes, especially a young one like him. And then I spoke to him before I opened the door. I explained that he needed to wait, and I would help him out on my terms. Amazingly, it went sort of okay. I wasn’t as ‘in charge’ as I wanted to be, but more than earlier, and that was progress. And all progress is good progress. This is what I tell myself daily right now.

We played for a good twenty minutes, after which I pulled back to the gas bar. I told Kaiser he would stay in the car, and I would get out without him, and commanded him to ‘Sit’. He sat. I held up my hand and said, “Wait”. And he waited. He watched me closely as I moved out of the car and filled up, but he waited politely.

I had opened the window a few inches and spoke before going in to pay–because of course the ‘pay at the pump’ wasn’t working. He sat there, all proper, and watched me. “Wait’ in Kaiser’s world means I will return soon, and you may move around while you wait.” He practiced in the next few minutes.

The guy in front of me was on a mini-winning streak, buying lottery tickets and spending the money faster than he was making it. He used his winnings and added from his pocket, before finally wrapping it up, whether due to boredom from not winning, or out of change. Either way, he shuffled along and I paid for my gas.

In the car Kaiser sat as properly as an Emperor should, in a fur coat and four legs, and waited, eyes on me with every move. I sat in with no lunging. He rose to his feet, kissed my shoulders generously, as if to thank me for coming back, and then settled down again.

The final stretch home was completely uneventful, until that moment when we pulled in the lane. Incorporating a German Shepherd dog with fear issues, into a family of seven humans and one other canine, is a very different challenge entirely.

It has been almost a month now, since getting Kaiser, and he has overcome most anxieties in the day to day. Nighttime anxieties still come and go, and, speaking of coming and going, that’s still not his favourite thing, to have changes to the household ‘pack’. So our last big hurdle is to have all of us leave him several hours a week, when the children return to school and I begin university next week.

Aside from this he has made himself at home enough to sneak into Tim’s chair, wear Bryan’s hat, and allow our 10-yr-old cockapoo, Akira, to visit his ‘house’. Keeping in mind that she despised him and would have had him for a snack if she wasn’t a quarter of his size, so some of that ‘allowing’ is her growth. 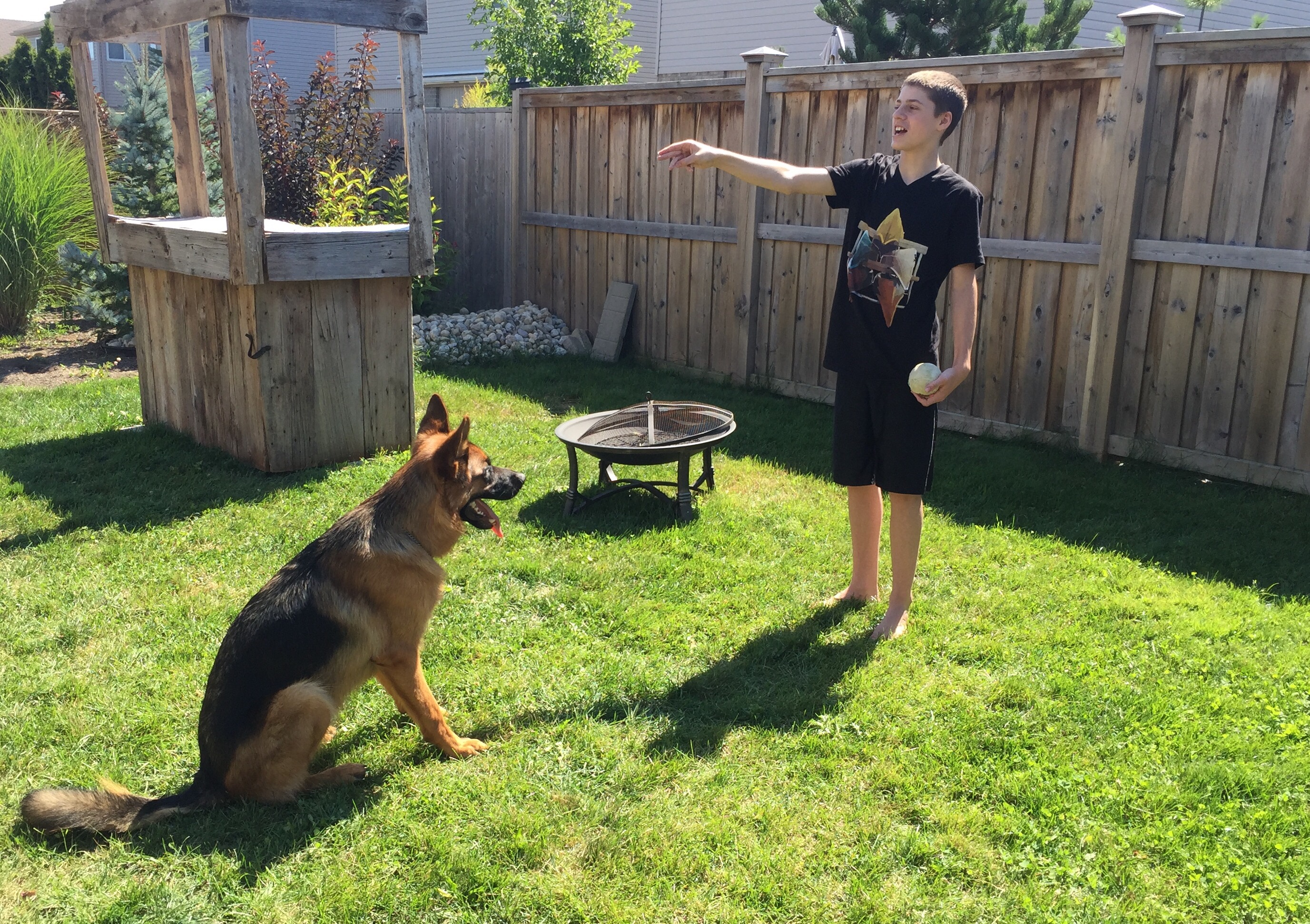 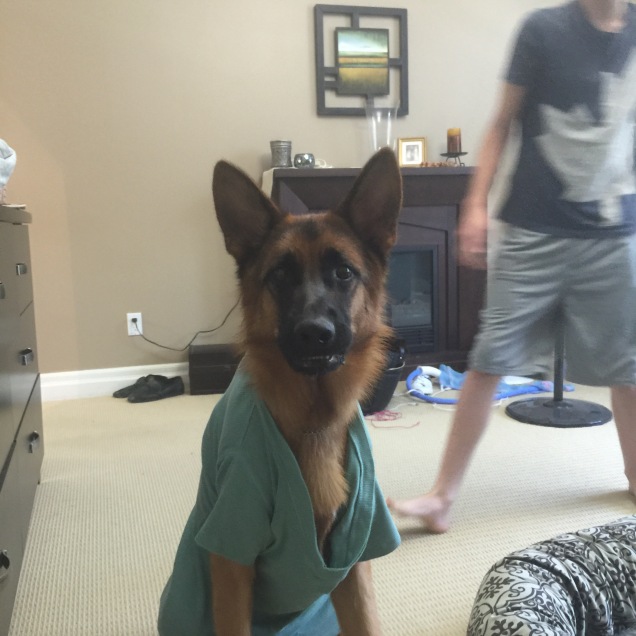 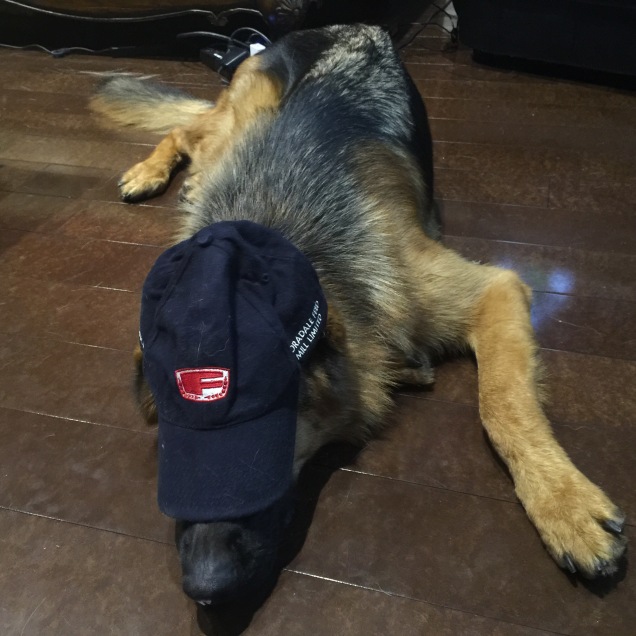 His favourite thing in the world is playing ball, of any sort but in particular soccer. And especially with our youngest, which has been a very good thing, drawing the youngest teen off the couch to play. I read that German Shepherds do their best to draw a family together, and that is accurate. His self-appointed job–because he is bred to be a working dog–is to engage the whole family in play. Everything from keep away, to high jump, to hide and seek, and whatever entertainment we can conjure up, he’s in. When playing ball we count down, “Three, two… play ball”, so that when our son randomly counts, he studies him closely, appearing confused as to why there’s no ball to play.

All around, I am glad I made that trip to Montreal four weeks ago, and glad that we acquired a dog of his intelligence, obedience and affection. He is a guard dog, however, so if you plan on ‘popping by’, call first and don’t walk into the house uninvited, or without an ‘inspection’ from the Emperor himself.

And now, having adjusted to life with a dog like Kaiser, and before I become the crazy dog lady if it’s not already too l, I will move on to a new chapter of life. Where the road will lead,  after my next two years of being invested in intense study, doing the University of Waterloo Master Peace and Conflict Studies, I am not certain. Still, I am glad I made that decision to move in a new direction even though I do not love the uncertainty of dramatic change. That said, I am confident it will be good and a step forward… it always has been in the past.