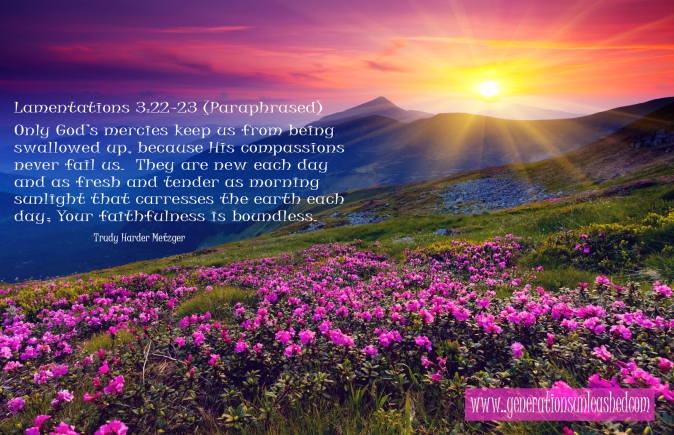 Life is overwhelming, from time to time, for victims of sexual abuse and violence, when past memories haunt the mind, or trauma threatens to spill its pain in blood red all over our present. When flashbacks intercept the sweet wonder of a lover’s touch, and run like a thief with a moment blessed by God in marriage, leaving black footprints all over the marriage bed.

Or when the single heart longs for relationship, desiring that friendship of marriage, but fears of past loss invade those desires, and shut down a beautiful heart with lies. Maybe, for another, the desire itself has been covered over with feelings of worthlessness, hate and resentment. Desire, too soon awakened and having robbed little girls of sweet dreams, and little boys of adventures, has fled, leaving them empty with hollow eyes.

Life is overwhelming, from time to time….

Only God’s mercies keep us from being swallowed up, because His compassions never fail us. They are new each day and as fresh and tender as the morning sunlight that carresses the earth each day; Your faithfulness is boundless. Lamentations 3:22-23 (Paraphrased)

Tim and I walked, hand-in-hand, laughing. I chattered happily. Just being me. Snuggling closely to his arm, flirting a little with the man who won my heart several years earlier.

It had been a great date night. A luxury not often afforded us, with our two beautiful babies demanding our time and our energy. Alicia was not quite two and a half, and Nicole was only sixteen months behind.  They kept life full and busy.

In spite of the busyness, on special occasions we managed, one way or another, to celebrate. Tim’s job didn’t pay well, at that time, and when we purchased our house on two incomes, we had not expected I would be able to conceive so quickly, given my history and the doctor’s warning. (Read story here.)

To go from paying for a house on two incomes, to raising two little girls and paying for a house on one low income, was challenging, so our dates and celebrations were not extravagant. But they were time together. Alone. And that was what we needed. To sit across the table from each other, in the candle-light and simply be in love.

As every parent understands, we sat there, talking about our babies, not truly able to ‘leave’ them. We talked about life, how things changed so quickly. About how blessed we were. I’m sure I chattered about how crazy in love I still was with him. I could never say that enough… Still can’t.

We could have stayed longer, in the restaurant, drinking coffee and holding hands across the table, me playing with his fingers. (It’s another habit I have.) But truth is, we didn’t want to be away from our girls too long, especially me. I struggled with leaving them. So many silent, unspoken fears lurked in my mind. ‘What if…’ Always, ‘What if…’ My childhood was never too far away.

That night was no different. When dinner was over, and it was over more quickly than we had anticipated, we decided to go back, pick up our girls and head home. We were tired. Home was inviting.

We arrived early to pick up the girls at the babysitters, out in the country. The night was dark. The house had only a few rooms lit. At the front door I froze, my heart stopped in crippling fear.

The kitchen light was off but I could see into the family room, across the house. There a teenage male had our oldest daughter in a position that shot terror through my heart. The squeaking of the door, as I opened it, caused a scuffle, as he released her and sat up, startled. Our little girl ran to us, giving us hugs and kisses. Happy as a lark.

Relief washed over me, at seeing her so happy, so free. Still, the image played in my mind. I could only pray that nothing had happened.

Tim picked up his little girl, who chattered excitedly about her evening. Tension hung in the air. The teen couldn’t look us in the eye, shifty. But what were we to do? Confront it? I didn’t even know if Tim had seen it. I felt nauseated

I checked on our other daughter, in another room with another teenager, a girl, while Tim changed Alicia’s diaper, not far from me. We chatted with the young girl for a minute before we headed home.

In the car Tim played Alicia’s favourite children’s CD. We turned the volume off at the front, so we could talk, and the music would drown out our voices, so Alicia would not hear us. Before I could ask Tim, he started the conversation, his voice tense with uncharacteristic anxiety.

“I think it’s time you have a talk with Alicia,” he said. “When I changed her diaper, she said something about not touching her ‘there.’ I think we need to find out if anything happened tonight and make sure she knows that no one is allowed to touch her.”

I told Tim what I saw, when we got to the door and how uncomfortable I was, how concerned over what I had seen and sensed. We discussed how we would handle it, without planting ideas. The last thing we wanted was to give our innocent daughter false memories, and cause unnecessary destruction. We noted her innocent joy and carefree welcome when we returned, and hoped it was evidence that nothing traumatic had happened.

We felt quite confident that God had brought us back early, specifically to protect our children. But we would not rest without a discussion, so we agreed that I would have a chat with Alicia at home.

It was just after nine when we arrived home. Tim set about making hot chocolate, while I assisted Alicia with pj’s and tucked Nicole in her crib. As I helped her change, I talked to her about her body. I had told her before, but told her again, that God had made her body beautiful and special, and that she had the right to protect it. I told her no one is allowed to ‘feel, touch or see’ her body between ‘here’–pointing to the top of her torso–and ‘here’–pointing to just above her knees.

At the time we were still in the Mennonite church and wore skirts and dresses, so I told her that no one should ever lift up her skirt. That it’s her ‘private’ body and people need to respect it. She cheerfully told me that the teen girl had touched her that night, but when I asked more questions, the closest I could figure out was that she had needed a diaper change.

“But people can touch mine arms, right?’ she asked.

“But not mine body, right?”

With that it was done. We headed downstairs for hot chocolate, where Tim asked, “What were you and Mommy doing?”

“Oh… Mommy and I just had a little chatter,” she answered cheerfully, then proceeded to give Tim an overview of what she had learned, including the word ‘respect’.

Alicia displayed no evidence of victimization, so we did not pursue it further. We did learn that there was victimization in that home, and could only thank God for protecting our daughter.

From that day forward I taught my children to kick, scream, bite, punch, run, if threatened in any way. I instructed them to always tell an adult if someone touched them or made them uncomfortable with how they handled their body, and to tell Mommy and Daddy when they get home, if we’re not there at the time.

And that is what I tell them still. “Be as aggressive and as violent as you need to be to protect yourself.”

That day, seeing what I saw, and fearing the worst would have happened had we stayed a little longer at dinner, made me realize the importance of talking to our children at a young age. Sometimes they think I’m too protective. Maybe I am. I try not to be. But I cannot live with the thought of having left them vulnerable through silence. I have never held them back from sleepovers, parties and time with friends, because of fear. But without fail I have asked them, as they are about to leave, “What do you need to remember?”

“Respect,” is the sometimes exasperated answer.

“And what does that mean?”

“Don’t touch, and don’t look at other people’s bodies.”

“Now run along and have fun!”

The conversation may not go exactly like that, but something like it. I want our children to know they have the right to protect themselves. The early stages of teaching were easy, and they helped prepare us for the next level, the harder questions that followed.