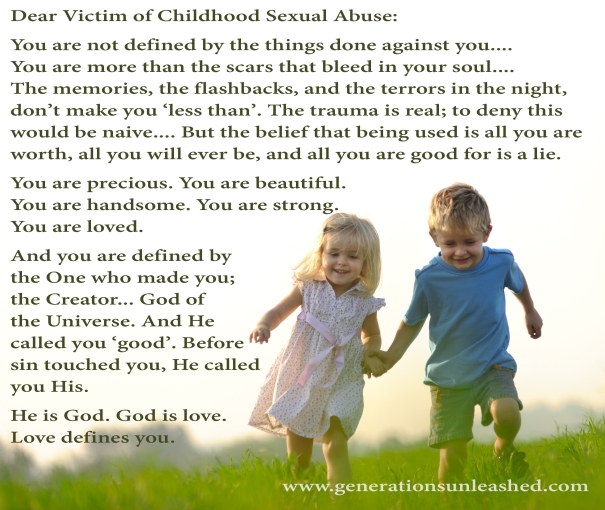 Tears washed our bruises. Heaven stooped down and, having knelt beside us, wrapped a warm blanket around our naked souls. Love told us we were worth dying for. This Love defines us.

An observation I’ve made in speaking out about sexual violence, is the imbalance of the whole thing. Mention the corruption and wickedness of the thing, and comments or private messages trickle in (or flood in, as the case may be) reminding that the abusers are human too.. they need grace too… they must be forgiven too…

But mention that God loves the abuser (hates, even despises abuse) and that His grace is enough, that His love will forgive, and those same people are strangely quiet. No reminding that the victim is stripped at a soul level. No pointing out that many are suicidal, or find a way to survive (if only barely).

And I ask myself what is wrong with that picture. What is with defending perpetrators, or at least protecting them from the harshest reality of what they have done? One person said that if they fully grasped what they had done, they’d commit suicide. That may or may not be true, but I will add that is no reason to protect from truth, especially when the victims in their wake do struggle with suicide and can’t get away from the truth. My prayer would be that with the revelation of the incredible wickedness of molestation would be accompanied by two things. First, an awareness of the grace and forgiveness of God. Second, the need to be accountable for the crimes and sins and release the victims from blame.

Thinking about the imbalance, and how often victims are lost in the shuffle, neglected, overlooked… even blamed… my heart is drawn to focus on speaking words of life over victims in the coming days. I would love to commit to a short daily thought for 30 days, empowering victims, but my schedule will make that difficult. That said, I’m going to try. Even if it’s nothing more than a photo with a few words of hope, encouragement and empowerment.

For 3o days, when I post anything at all, I want to focus only on victims. Not because I hate offenders, or wish to incite hatred. But because victims have been silenced too long and I know the difference it makes to reclaim our God-given voice, our God-given identity, and put the shame and the blame back where it belongs… and be free.