To the pastor whose wife was shot in the foot:
A man wearing a navy hoodie walks into your house one night, shoots your wife in the foot. You read a few bible verses and pray for her. No hospital. No doctor. Just a simple bandage. No police officer.

The next night a man walks in, shoots her in the foot. You respond precisely as the night before.

Each night you urge your wife to forgive. You suggest reading her bible and praying more. You ask her what she might have done to make the men shoot her in the foot. There must be some explanation. Men don’t just walk into a random houses and shoot women in the feet without cause.

Your wife tries to continue with her normal duties. She hobbles about on the festering wound, limping and wincing. It is an ever present reminder of the traumatic events.

You urge your wife to forgive. Once she has truly forgiven, her foot will stop hurting, and the limp will go away. With each improvement, you are relieved to be one milestone further from the shootings.

Some time later, your wife — still hobbling, foot still infected — sees a man walking in the lane wearing a navy hoodie. She freaks. It turns out to be a neighbour. You chide your wife. You tell her she’s overreacting. She must not have forgiven the other man if she’s reacting so strongly to the neighbour in his navy hoodie.

A broader epidemic & proposed solution:
At church you learn that other men’s wives have been shot in similar fashion. But it doesn’t end there. You learn that this has been happening in other churches too. It’s at epidemic levels. And women are freaking out at the sight of hoodies for no reason. What’s more, you discover the men doing the shooting are fellow church members. Several are even fellow leaders; pillars of the church who would never do such a thing! Now you are certain that the women are causing this!

Troubled, and uncertain what to do with it, yet not wanting your church to fall apart, you address it by preaching a series on Forgiveness. Five Sundays in a row you preach on Forgiveness. Surely, if all of the women who were shot could only forgive, things would not be as they are.

You then preach on what the women may have done to trigger such an epidemic. You point out that every woman who was shot was not in the kitchen at the time she was shot. If each had been in the kitchen, none of this would have happened. You urge the women to take ownership of their failure, thus protecting the oncoming generation from having their feet shot. And, though your message this Sunday is not about forgiveness, due to the critical role forgiveness plays, you put in a gentle reminder to forgive.

Following this you dedicate a Sunday to speaking against seeking attention. You point out how they are using emotional responses at the sight of hoodies to control the men and dramatize their experiences. You gently let them know that their exaggerated limping is a tool of the devil to shame the men and bringing great harm to the church.

A few good men and some wounded:
You meet with the men, including those who did the shooting. Some admit to having at least held a gun and considered shooting, a few admit to pulling the trigger. Other insist they have never even seen a gun, let alone held one. The allegations are absurd! False allegations, most are! It is the women sticking their feet in front of the guns, asking to be shot, that is the problem.

Some who had no part in the shootings speak up in defence of these honourable men, echoing their sentiments; the women were wanting their feet shot. Others suggest that maybe it isn’t the women’s fault at all. The latter are asked to be silent or leave. Most of them leave.

Good riddance, you think to yourself… no one needs their bitterness and negativity. Until they see how divisive they are, it’s better they are gone.

And no one notices that half of the men who leave are limping. They too have been shot in the foot and have festering wounds.

A gentle reminder to forgive:
You wrap it up with one final message on forgiveness. You share how meaningful your meeting was with the ‘brothers’. Some admitted to having thoughts of shooting feet. Yes, a few were guilty, but they are deeply sorry. Having learned from their mistakes, they are now more equipped than before; better men for having sinned and repented.

You cannot emphasize enough the importance of allowing the men in the navy hoodies return to leadership. God has called us to forgiveness and unity. We should receive them in full fellowship, restoring all relationships and supporting them in their positions, and trust they will never do it again.

You remind them of the Apostle Paul who murdered. He didn’t just shoot women in the feet. He murdered God’s people. Surely, if God can forgive him and have him preach, there is still a place behind the pulpit for men who shoot feet.

And nothing has changed:
Women’s feet are still bleeding. Festering wounds are turning gangrenous. Slowly they die. The men who were shot, too.

The men who shot them, keep on shooting. Shooting other men. Shooting women. Shooting boys. Shooting girls. All in the feet so they must find some way to live, while they die slowly.

And then you hear that women are shooting boys and girls in the feet.

The children are shooting each other in the feet.

What went wrong?
You go back to your notes on Forgiveness and wonder what went so wrong. Why didn’t it heal everyone? Why didn’t it stop the shooting. The bleeding. The gangrene. The epidemic.

It never occurred to you to kneel down and get your own hands bloody. To pour ointment gently on their wound. To wrap her feet tenderly, and offer her a footstool. To teach your congregation to tend to her needs while the wounds heal. It never crossed your mind to lay aside your sermons for a few weeks, and instead pull up a stool and lean in to hear her heart. Truly listen. To wipe her tears, look her in the eyes and say, “I’m sorry. You did not deserve this. It is not your fault.”

A wounded bride, dying children and the Jesus who wept
And Jesus weeps. His bride’s wounds have become a cancer, slowly killing her soul.

His bride’s tears flow uncomforted. Her infants lie scattered, lifeless at her feet.

Jesus cries, again, from the cross, “I thirst!”

And the best we have offered Him is vinegar and gall, served on a hyssop branch — to numb His pain and purify His lips.

The preceding story is a parable.

Sexual abuse continues, an epidemic in church. Allegations, carelessly labeled false without ever leaning in and listening to the victims.

Mothers are blamed for their children’s traumatic experience, and sometimes fathers. Unless the parents are ‘model’ members, then the children somehow removed themselves from protection.

Excuses abound. Forgiveness is treated with the care of a cuss word. Hearts even less gently.

And a few godly men rise up with their sisters, and wipe the tears of the Christ, in the eyes of the children, and the oppressed.

To those honourable ones, “Thank you.”

To read more about what to expect on Training day, click HERE and scroll down to the Elmira training announcement. 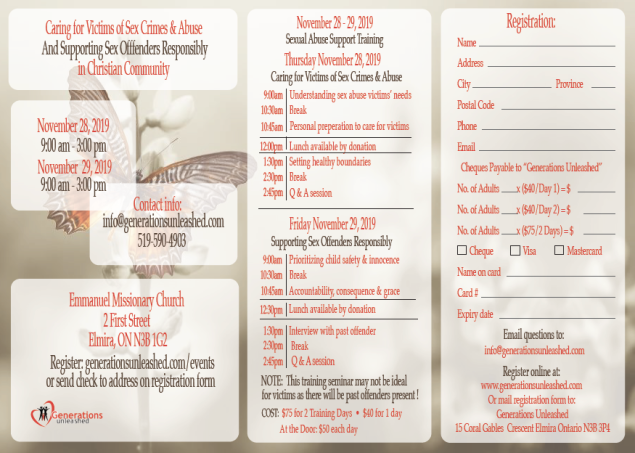