It was Sunday evening when the text came in asking me to listen to some ‘Father/daughter’ dance songs for the wedding. In the seven months of wedding prep, I’ve been shockingly composed. In fact, I was starting to wonder if there’s something wrong with me because I’ve not been all weepy about seeing our first daughter get married. I feel good about it, actually, having observed them these past few years, and how they accept each other, idiosyncrasies and all. And, yes, they do have some. We all do. I’ve observed how Andrew cares for Alicia, and that detail stands out above all things. So maybe it’s okay that tears haven’t been a big part of this journey. Still, I was a bit worried it would hit out of the blue on wedding day.

And then the text came in.  A list would be on the way shortly, which I didn’t realize, so I searched the web. I should have expected it, but I didn’t. I found “Daddy’s Angel” and the emotions started. The memories…

Alicia used to come into our room and make a bed on the floor beside daddy when she couldn’t sleep at night and I had other babies, and with five in seven years plus to miscarriages, it was pretty much always. She would show up at our bedroom door, or beside our bed, blanket and pillow often already in hand. Daddy would reach his hand over the bed and hold her hand until she fell asleep, and her little heart would be at rest. As she grew to independent adulthood, through successes and struggles, Tim loves the little girl who made him a daddy for the first time. 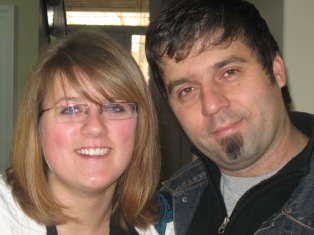 It all took me back to the healing of my heart as I watched him, first with her, then with Nicole. An independent soul from the day she was born, and he patiently worked with her persistence and determination. That’s not said she didn’t win her fair share. In fact, one day she announced to her siblings, when she was six or seven that praying to God we have to be kind of like with Daddy, and keep coming back over and over again, until He gets tired of it and gives us what we want.  While her theology wasn’t 100% accurate, she spoke with sincerity, celebrating her own determination. And she should. God made her with that determination for His purposes. And always Tim loved her, as generously as he loved his first.

And then came Bryan with a curiosity that led to a thousand and one answers to the question”Why?” and a whole new kind of rambunctious. An opposite to his daddy, with my spunk and crazy, he challenged and stretched his daddy in the rough and tumble of life. Rough-housing, which had never been something I saw in Tim, wasn’t optional. Granted, it tested his patience at times, but seeing them wrestle and roll, was delightful. It ended several years ago with Bryan sitting on Tim’s chest, having finally overthrown him, and having tested that patience to a whole new level, Tim looked up at Bryan, clearly at his son’s mercy, with arms pinned beside his head, and sternly said, “Have you had enough?!” And we all erupted in fits of laughter, regretting only that there was no video camera. In it all, with oreo cookies flying against the fridge like a hockey puck, and a soccer ball shattering the one and only expensive candelabra in our home, and the teasing and laughter, Tim loved Bryan well.

Todd, the fourth son, came with a quiet temperament, and eventually we would discover an incredibly busy mind. A youngster of few words, big deep eyes, and unspoken curiosity, he gave us both a run for our money on more occasions than one. Whether daring to explore a big department store alone, the instant we turned the other way, and scaring the life out of us, or hiding in the back of our friend’s van at four because he so badly wanted to go along with them, or curling up behind a chair and falling asleep, he kept us on our toes. Through the scares, the laughter and a whole lot of affection, Tim loved his fourth with the same dedication as the first three. 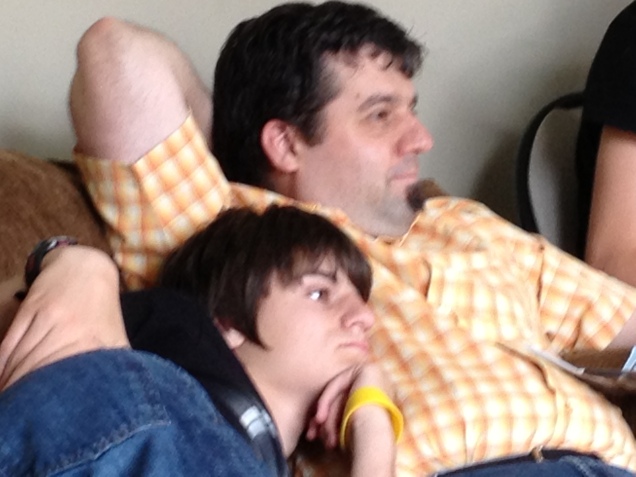 And about the time when we thought we were done, and ready to solidify our family of six with surgery, it happened, that thing I said I would not do. It all began when we dated, and discussed our hopes for having a family one day. Tim said four was a good number, and I wanted six. But, if not six, then four would have to do. Tim suggested a compromise, that maybe we could have five, but I had a list of reasons why five wouldn’t be a good choice, not the least of which would be the loneliness of being the odd number out.

It was almost three years after our first four–all of which were less than two years apart–and my feeling about odd numbers wouldn’t have been any different than during courtship, if I had contemplated a ‘plan’. Fortunately for us, God had a plan that superseded my logic.

Kordan was, from the start, a content and affectionate child. Physical touch, from day one, comforted him, but on his terms. One adult finger, held in tight grip, offered him the security he needed to relax and falling asleep. He was fortunate to be the fifth, and three years on behind the others, because practice and experience, not to mention age, relax us parents, so he faired well. The bumps and scrapes were fewer and farther in between, and life was a bit easier for him than for the others. And through it all, Tim loved Kordan as much as he loved the first four.

“Daddy’s Angel” plays in the background and my heart is full of thoughts from yesteryear. Memories of a handsome young man fathering so tenderly our five children, wrap around my heart and squeeze so tight that teardrops spill from it. Thoughts of yesterday, working side by side with that same man, attaching barn board, twinkly lights, burlap and lace to wedding things, creep in, and I am as crazy in love with him today as I was back then.

I told a friend about the song… about the tears and how it took me off guard to cry like that. “And it brings back memories of your own father too,” she said. And that’s when I realized those painful old memories of an abusive father, though long replaced by forgiveness and grace, were now officially replaced with memories of a kind man loving is children well. The man I married 22 years and five months ago this week.

This father’s day I honour Tim above all men I’ve ever known. And I’ve known some pretty amazing men in my lifetime. But not one holds a candle to the kindness of my husband. Sure, he’s imperfect, and I could point out some idiosyncrasies. But the one thing Tim taught me over the years, by his example, is to focus on the good and the strengths, and loving well. Thank you, Tim, and Happy Father’s Day! You’re the best!

And because of my own broken childhood, and not having a daddy to run to with safety and confidence, I can’t go through this day without thinking of those whose daddies are missing, for whatever reason. Tim can be many things in my life, but he can’t be my daddy. Watching him parent can warm my heart, but I’ve learned that I have to let my Heavenly Papa fill that one place that only a Papa can fill. This comfort is my prayer for all lonely children

For the fathers with empty arms, having lost children to death, miscarriage or due to infertility,  and those whose children have turned their hearts away without just cause, I pray for you, that God will be near and that people will be compassionate and sensitive to your loss and loneliness.

My prayer is that if you are lonely and hurting this father’s day, whether you are a father, a son or a daughter, you will find Him faithful and feel His love in your loneliness.  And if your heart is full and everything is perfect, that you will feel blessed and celebrate that joy this Father’s Day.

In memory of my father who has been gone fifteen years now, I’m listening to ‘The Living Years‘ by Mike & the Mechanics. It’s pretty much a tradition now, to think of Dad on this day and listen to that song… among others. There are things I would say, if I knew what I know now and had a day with him. I would keep the same boundaries, and I would still hug him and tell him I love him, in spite of all the abuse. It’s how I’m wired, a part of who I am, to be able to do that. Not everyone has to make themselves do these things. But if I had that one day, I’d tell him how much it hurt, and I’d ask more questions about his story, not to excuse what he did, but to have a better understanding. And I’d take him out for a day to some outdoor event with old machinery. But he’s gone, and what I have is the memory of God’s grace in his life and in mine. And that’s enough in a fallen world, where things are not as they should be. It will all be different on the other side of this life.

And, finally, a very special Father’s Day blessing to Tim, who is preparing his heart to watch his first little girl walk into the arms of another man, this Friday, for the rest of her life. Alicia will give up her father’s last name, and take on Andrew’s name to become Mrs. Martin. And there’s a thing about this whole process that tugs at a Daddy’s heart. It is a good thing–we know from experience–but the adjustment is worthy of mention, even while we bless her. Praying, Tim, that God will be near you this week and always. Thank you for loving your children well, and teaching me what a father should be. xoxo

One thought on “Happy Father’s Day”