I had not more than taken that glimpse into young love, when a family happened by. Two energetic teenagers soon climbed up the railway track–or whatever you call the structure holding it up–as mom stood by reminding them to be safe.

I smiled. Boys will be boys. And sometimes girls will be ‘boys’ too… ‘tomboys’… I would have been the first in line to try the shenanigans one day. Too old now, but not too old to remember catapulting from on top of the stable in the barn, as a pre-teen and young teen. 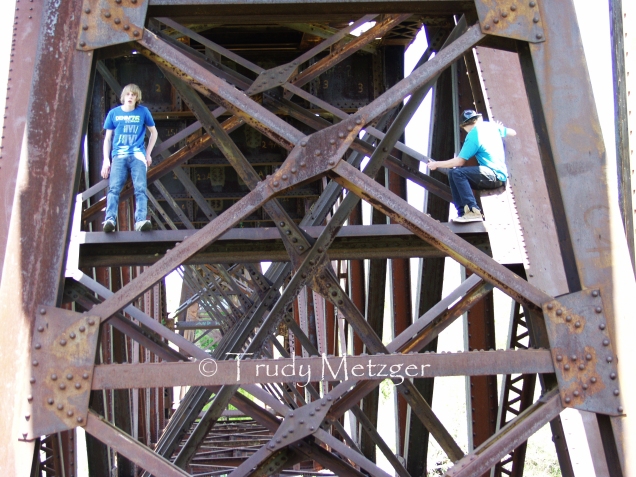 Mom said something about wishing she had brought a camera just as I offered to take some pictures and we stood there, with our cell phones, exchanging emails to make sure we could connect and get the pictures to them. I took a few of them as a couple, and heard a little tidbit of their story. They told me the pictures would make it all the way to Australia, where he was from, as he would definitely want to share them with his family.

I continued on then, to my car, where I sat a while just watching the creatures and the people. An elderly couple, whom I had met on my walk, sat under a tree, resting. (People with their backs turned don’t really count, when it comes to rules about taking pictures…) Though older, he reminded me much of Steve Masterson, and I found myself missing Steve and Jackie who, like Howard and Alice, had a powerful impact on my life, and on Tim’s. They were most delightful conversationalists, and I thought how bitter-sweet it is, to meet people only once and never to really know them.

I snapped a shot of the view we shared, then packed up my camera and headed back to Elmira…

Tim–who went to church with our boys–texted and asked if I would pick up a coffee at Tim Hortons. A double-double. As I pulled in, an Old Order gentleman walked out, carrying his tray of coffees. Across the parking lot, two friends waited–one on a buggy, one on a bike. I make exceptions about taking pictures of people where there are horses and/or buggies involved. Or bikes. (Okay… I just made that up, but hey, it works.) 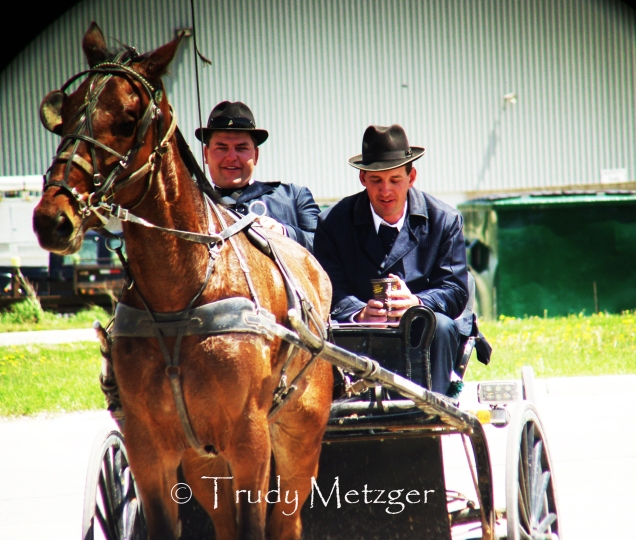 After picking up Tim’s coffee, I did the final jaunt home. Nicole had baked the ‘Potato Flake Sourdough Bread’ that I had put in pans the night before. (An outstanding ‘friendship bread’ type recipe that I was given starter for this week, and we all love. I wish I didn’t… I’d rather stay away from bread.)

My heart was full. I met God in ways and places that are as beautiful as worshipping Him in a traditional church service. I value and believe in the importance of believers gathering together to worship God, as a God-family, but maybe salvation and ‘measuring up’ are not so closely linked to the ‘where and the how’ as we might imagine.

I’m not like the pastor who proudly announced that he never missed church a day in his adult life–not even when his wife had given birth the day before. I’ve missed church when nobody in my life gave birth and nobody was sick… I just played hookie. And not only once. I’ve done it  a few times for no reason at all. Quite a few. And I’ve done it because church was too difficult when hard times caused me to struggle and I didn’t feel safe with people….

Just off of our street, shortly after Barnswallow Street turns to Whipperwill, is the most gorgeous apple tree. I had stopped there on my way out, to capture the apple blossoms. As I contemplated how life, with all of its bumps and scrapes, seems at times to contradict the promises of God, I thought of one of those photos, and that is the extent of my ‘morning sermon’ that I would like to leave with you, in the form of this picture.

God does not lie. His promises are forever. And, as some of my dreams are coming true, I remember the many times I doubted and struggled. Times I was sure God used me as a pawn in a giant chess game. But always He has carried me through–sometimes kicking and screaming–but always with purpose and destiny.

Wherever you find yourself in your journey with God, and no matter how difficult it is to keep believing in Him and His purposes, hold on to the truth of His promises.

To Donate: Generations Unleashed, and Help Victims of Sexual Abuse in the Church
(Tax Receipts will automatically be issued for all donations over $20)

Return to the First Post in ‘Abigail’s Story’ Series