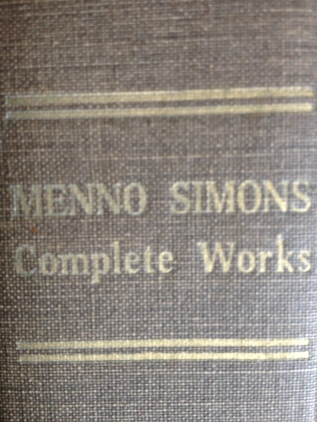 My father handed me the big, fat book, of boring, religious writings. (Forgive me. I mean no disrespect, but old English, for me, is associated with a distant, non-relational God.)  An ugly brown. Go figure. As unappealing to look at, as the thought of reading it. Another book in the collection of the ‘Never Read’ section of my book-case.

Most likely it was my father’s way of reminding me to never leave the Mennonite church–in whatever ‘brand’–and his attempt at keeping me on the ‘straight and narrow’.

Whatever his motive at the time, and however (appropriately) plain, and even boring, the book might be, my father had given me a gift that meant the world to him. He handed it to me with almost a sense of reverence. On ‘this’ man, Menno, our faith heritage was founded, and that was something my father treasured. Still, it stayed a step below his near-sacred Martyr’s Mirror, which I had spent much time reading as a child. Now that book I would have loved, had he given it to me.

(I must inject here that, in 2001, my father became very ill, suffering from diabetes, that had, unfortunately, only worsened with his love for cultural fried foods, desserts and other taboo menu items, and led to him needing an amputation. While in the hospital I spent more time with him, one on one, than any other time in my life, and during that time he blessed me to leave the Mennonite church. The ‘brand name’ no longer mattered to him. He had discovered grace, he said.)

This gift, of Menno’s writings, was given to me in my mid-twenties, or thereabouts, and it lay dormant for quite a few years.

One Sunday morning, while I was still in a conservative Mennonite church, the pastor preached enthusiastically on  ‘Divorce & Remarriage’ and the church’s stand on it. He referenced Menno Simons, our fore-father, our spiritual ‘leader’, more than he referenced the word of God. And, quite frankly, Menno wrote about it more than the New Testament, for sure.

What it was about the strong referencing of Menno Simons that inspired me, I don’t know for certain, but something tweaked my curiosity… A desire to hear it from ‘the man’ himself.

Maybe it was my irritation at hearing more about this ‘founder of our faith’, than Jesus Christ, on that particular morning, or the frequent preaching of the church’s positions, rules and constitutions, rather than the teaching and doctrines of Christ and the Word of God in general. Whatever it was, I do recall that these things always aggravated me, and unsettled me, and that particular morning enough to make me act.

Regardless the cause, the questions began… What did this man really teach and believe? Do we assume that what is taught, Sunday after Sunday, church service after church service, and what is attributed to this great leader of our denominational faith, is accurate? Or does anyone ever reference his actual writings? (Or, do they, like me, find that big ugly brown book a little drab, inside and out?)

Are we like the daughter who, when she moved out on her own, went to prepare a roast, and instinctively cut the end of the roast. When questioned as to why, she couldn’t  answer more than, “My mother always did.” When she questioned her mother, she said, “Your Grandma always did.” And when they asked the Grandma, she said, “Because my roast pan was too small.”

Do we ask the questions, make sure we know and understand truth, or do we simply accept, without questioning, what we have seen and learned?

I had no reason to believe he was being misrepresented… No reason to believe that our denominational views had evolved over time and morphed into something very different than what I had heard my entire life was the beliefs of our founding fathers. Such a thought never occurred to me.

When I finally discovered the book’s index system, I made progress. On page 311, of ‘A Humble & Christian Defense‘–ah… there’s our humility, boldly advertised, so as not to have it missed…–I found what I was looking for… but it surprised me.

I admit, I was fully expecting Menno to support everything I heard preached the previous day, and my whole life, but I had to see it for myself. What I found, instead, rather stunned me. I am confident that my Conservative Mennonite Churches of Ontario (CMCO) leaders, and all other conservative Mennonite leaders, whether in school, Numidia Bible School, or any other potential influence, never intentionally misled me about Menno Simons’ beliefs. But clearly they didn’t do their homework, because not one every mentioned that Menno Simons had it wrong.

Rather than type out his words, I have photographed what I found that day. His writing is in response to a false charge that the Anabaptist church allowed polygamy, having wives in common, and that any man could say to a woman, “Sister, my spirit desires your flesh’. [MENNO SIMONS, Complete Works, pg 310, in ‘A Humble & Christian Defense‘.]

Menno goes beyond simply answering to those charges. He expounds on where the church stands on the issue of divorce and remarriage, among other things, before he even ventures to address their accusation.: 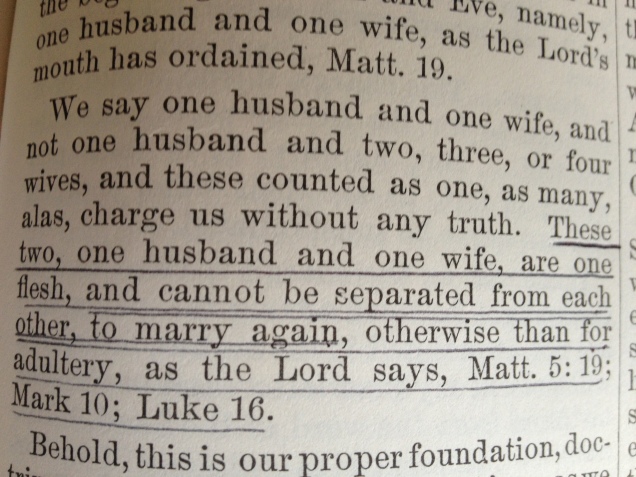 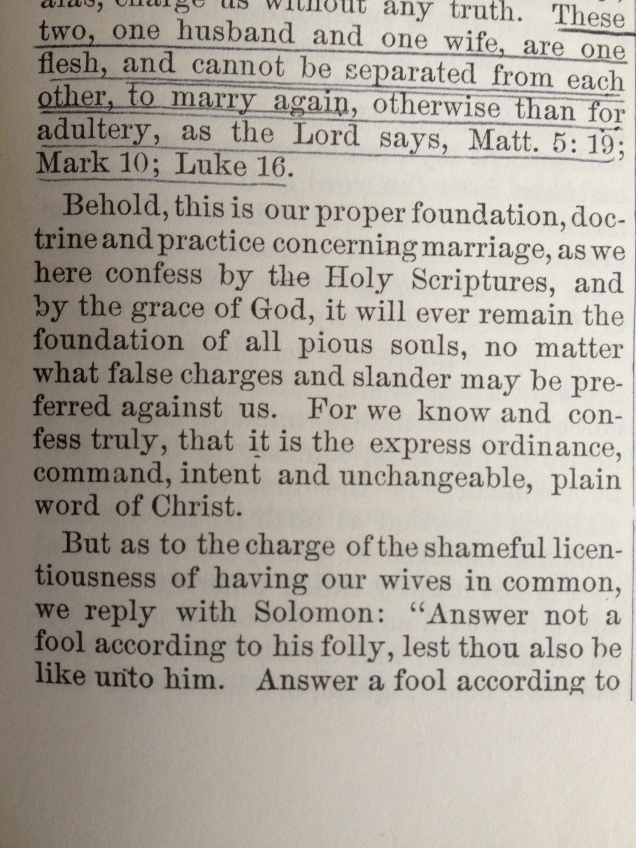 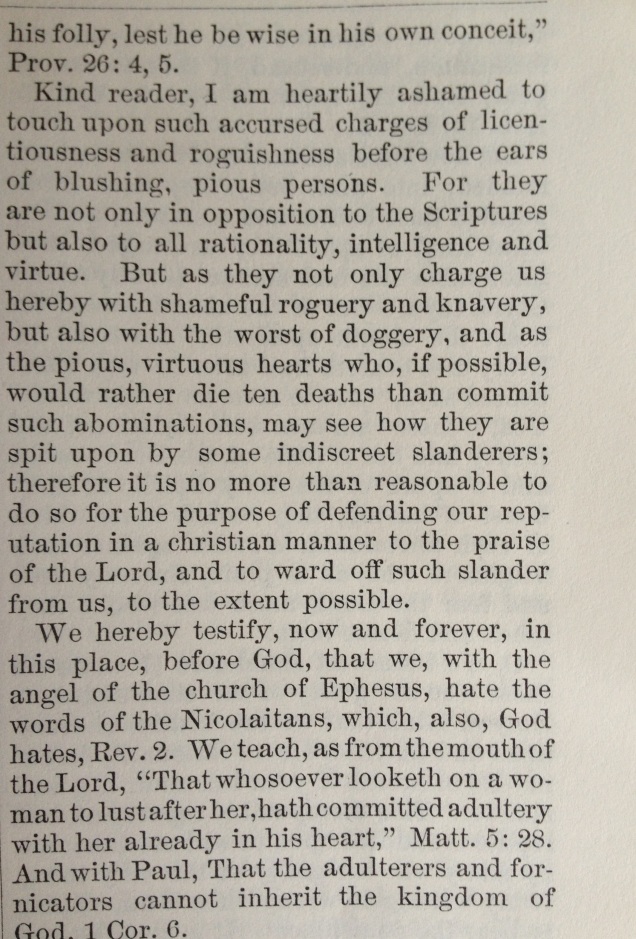 Lest anyone would quickly argue that ‘they cannot be separated from each other, to marry again’ is a stand alone ‘belief’, and the ‘otherwise than for adultery’ applies only to the separation, I did my homework to find out if in fact I read this correctly. What I found was the ‘Wismar Articles’.

In 1554, seven key Dutch Anabaptist leaders, including Menno Simons, Dirk Phillips, and Leonard Bouwens met together in conference to discuss some pressing issues, and the result was the ‘Wismar Articles‘.

“Article IV. In the fourth place, if a believer and an unbeliever are in the marriage bond together and the unbeliever commits adultery, the marriage tie is broken. And if it be one who complains that he has fallen in sin, and desires to mend his ways, then the brethren permit the believing mate to go to the unfaithful one to admonish him, if conscience allows it in view of the state of the affair. But if he be a bold and headstrong adulterer, then the innocent party is free – with the provision, however, that she shall consult with the congregation and remarry according to circumstances and decisions in the matter, be it well understood.”

That Monday morning, still in a state of shock, I called the wife of the minister who had preached the previous morning, and asked if they happen to own the Complete Works of Menno Simons. They did.

“Could you turn to page 311, in A Humble & Christian Defense, and read, out loud,  the second from the bottom paragraph on the left column of the page?”

She began reading, and gradually her voice faded, as she absorbed what she found. There was a pause, followed by, “Well, we have to remember Menno Simons was just a man.”

I didn’t say it, but the thought went through my mind, He sounded like a powerful authority on the subject yesterday… on this topic, I might add. I wondered then how we had come to idolize a man with such differing views from our present practice and teaching.

My intent that day wasn’t to endorse careless divorce and remarriage. However, my findings did force me to contemplate whether there are other ‘biblical teachings’ that we have reinterpreted, reinvented, adjusted, and enforced that might, in fact, have another valid biblical interpretation… Possibly even one endorsed by our denominational hero, Menno Simons.

I have friends and relatives whose marriages survived affairs, and some who did not. I have Christian friends who understand Jesus’ teaching on divorce precisely as Menno Simons taught them, and have remarried fellow believers. I judge neither view, because biblically I can see both sides. For myself, I have predetermined that absolutely nothing will ever sever our marriage bond. I am committed to Tim for life, no matter what. But that is easy to say about a man who loves and honours me with his whole heart.

Having seen the impact of affairs, sexual addictions, and brutal betrayals, woe is me if I should judge harshly another individual on the matter, when the Bible, and our forefathers, allow room for divorce and remarriage.

In writing this, I am not arguing for or against Menno’s position. I am merely exploring some of what he believed, and sharing it with the world….